Today was the last of the recognized traumatic "first anniversaries" since the death of a loved one, in our case the death of our son Geir Espen. Today was one year since his funeral.

Around midday today the sound of ringing bells from the church across the lake where we had the funeral service, brought back sensations of that day last year.

Some of our relatives who had arrived the evening before the funeral had expressed a wish to see Geir Espen one last time, and this was arranged for just before the service.

While there, by his coffin, we were invited by the funeral service representative to perform the traditional last rites for the dead. So Sigve and I proceeded to cover Geir Espen's face with the Face Cloth, symbolizing that no human will remove it before God himself removes it. Then we put the lid on the coffin, tightened the screws, and the six of us who were there carried Geir Espen's body out to the car that would take him to the church for the service.

It was such a profound moment and act, and all I could think was that one month short of thirty years earlier I had given birth to Geir Espen, and now I had to bury him.

It's been a strange year
filled with grief for a lost son,
and gratitude for a son's life. 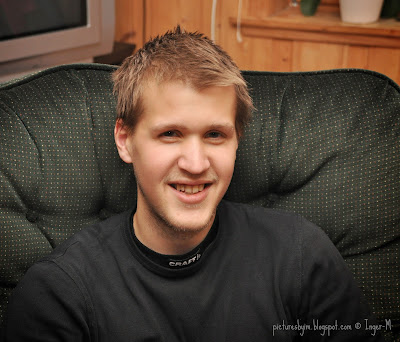 Some dear friends sent us this lovely poem: