The "Hickman catheter" is in place, and all went well. Sigve says that the only painful part of it was when the doctor ripped off some tape and it felt like most of his chest hair went with it :-) You have to remember that this is someone who actually enjoys going to the dentist! 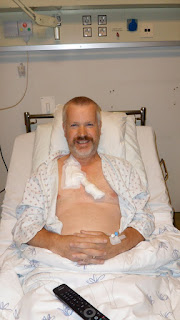 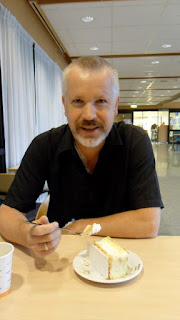 Now we have the weekend "off" before things really start to happen on Tuesday.
Written by Inger-M at 12:45 AM 1 comment:

This blog started out as a general blog about me, my life and artwork. I haven't been able to make it work yet, and now I will take it in a different direction.
We are facing some of the most frightening and turbulent times of our lives, and we know that our relatives and friends around the world will be anxiously waiting for news of how things are going. I would love to phone, e-mail or sms everyone directly, but realistically that won't happen. Many of you are on Facebook, but some are not, so I decided this is the best way to reach as many as possible. I will try to write updates as often as possible, but bear with me if I miss some days. Feel free to contact us, all words of encouragement will be very welcome! My e-mail is iesaverud@hotmail.com and Sigve's is sigvesaverud@hotmail.com
Or you can comment to the blog posts. Sigve will have a laptop with him in hospital, and e-mails are good as he can reply when he feels up to it. He will also have a new mobile phone number, and I'll be back with the number later. He will have a Skype account, and of course he'll be on Facebook. But he will be going through a period of being very sick before he starts to get better, so don't be offended if he doesn't reply!
As many of you know, a few months ago Sigve was diagnosed with leukemia. He has since had monthly blood tests to monitor the development of the disease. We were informed that he would eventually need a bone marrow transplant, and all of Sigve's brothers and sisters were tested for compatibility. Two sisters were found to be matches, Gerd was chosen, and preparations started. In the beginning of July the disease was progressing too fast in the wrong direction, and it was decided that the bone marrow transplant would have to take place in August.
Sigve has, and is still feeling as healthy and well as he always has. It seems strange to us both for him to be heading for a very harsh and dramatic treatment without having been sick at all! But the blood tests show that it is time.
His good health so far, and his high spirits should be a good platform to start from.
Tomorrow will be a sort of "kick-off". We arrived here at Haukeland Hospital Hotel earlier this evening, and tomorrow Sigve will have a "Hickman catheter" surgically inserted into a vein on the side of the neck. It sticks out again further down the chest. It works like the iv you usually get (at least if you are admitted to a hospital in Norway) into a vein on top of your hand, where they can administer fluids, medications, blood transfusions etc. Since he will need to have it in place for up to a year, having it in the hand would be uncomfortable. Really hard to explain when I haven't even seen it myself, but I'll get a picture of it to post when it's done.
When we learned that it was getting close to transplant time, we realized that our big planned vacation in September would not be possible. This was a big blow as we were both looking so much forward to meeting up again with good friends and making new ones, and seeing new countries and places.
But we did get the chance to go on a 10 day trip in the camper van, for which we are very grateful. We drove around the south of Sweden (because that was where the nice warm weather was) and spent a few days on Øland island. It's a place we've been wanting to go for some time. We had a lovely relaxing time, just focusing on ourselves and the here and now.
Over the last 10 years we have done a lot of traveling, and now we are really grateful and happy that we have seized the opportunities that have come along, and not put it off for "later". And when Sigve is fully recuperated and well again we intend to do a lot more traveling. Watch out world, we're on our way!
Carpe Diem - is more true than ever!
Written by Inger-M at 11:32 PM 5 comments: