These last days have been like a perpetual roller coaster. I still can't believe it.

Here is a recount of what happened:

This was an acute and aggressive kind of cancer, and treatment started the day after the diagnosis was confirmed, there was no time to wait. The acute stage starts when there are 20% immature cells in the blood stream, Sigve had 59% when it was picked up in a blood test.

In order to beat the new cancer Sigve was given high dosages of chemo for a week to hopefully kill off the cancer cells.

In the process it would also knock out his bone marrow and his immune defense system, and then it was supposed to rebuild itself, hopefully cancer free.

However, he did not get to that stage. While his immune defense system was knocked out, he contracted severe pneumonia and sepsis.

On Wednesday, Oct. 29, he started having respiratory problems. He was outfitted with an oxygen mask, and was moved to an Intensive Care Unit where they had one on one staff.

This happened around 2 pm, and he was still sitting up in bed and posting on Facebook.

The possibility of him having to be on a respirator if things got worse, possibly some time the next morning, was mentioned. But during the next 2 hours his condition deteriorated badly, and he had to be put on the respirator immediately.

We got to spend a few minutes with him before he was given a full anesthetic and intubated. By then his breathing was very laborious, and he couldn't speak much. When they removed the oxygen mask, his blood oxygen saturation immediately dropped to 60-70 %.

So we got to say a few words of goodbye, and sadly this became the last time Hilde Marie and I spoke to Sigve, his last conscious moments.

The sepsis that had set in caused the vein walls to droop, letting blood seep into the surrounding tissue. With a very low platelet count, his body couldn't stop the hemorrhaging. This loss of blood from the veins then caused the blood pressure to drop too.

The pneumonia made it difficult to get air fully into the lungs, so at one point they decided to turn him over on his stomach, to try to expand the lungs. But when he was turned over, a lot of blood came up, and it turned out the fluid retention in the lungs was actually hemorrhaging. An anesthetics specialist came in and looked into the lungs with a scope, and gave adrenalin directly into the lung. This slowed down and eventually stopped the hemorrhaging.

So the night was spent administering medications to balance blood pressure, oxygen saturation, hemorrhaging and a lot more. Blood tests were taken all the time and he was hooked up to all kinds of equipment to monitor everything that was going on in his body. Porters were running back and forth to the lab, delivering blood for analysis, and bringing back refills of platelets, plasma, antibiotics, anything he needed. His room was full of doctors and nurses all night, and we are confident that everything that could be done was done.

In the morning things seemed a bit calmer, but he was weakening all the time. We spent the time sitting with him, stroking his skin, talking, to somehow let him know we were there.

At around 1 pm they had to turn him back over on his back again, to try to get some of that same turning effect, and they needed to do an ultrasound scan of his heart. We had to leave the room, and they told us the turn might be too much for him, but it was all they had left to try.

By now his heart was barely beating, only blood pressure increasing medications were holding up any kind of blood pressure, and his lungs were too damaged to breathe on their own. We were let back in, to sit with him again, to take our time for our final goodbye. 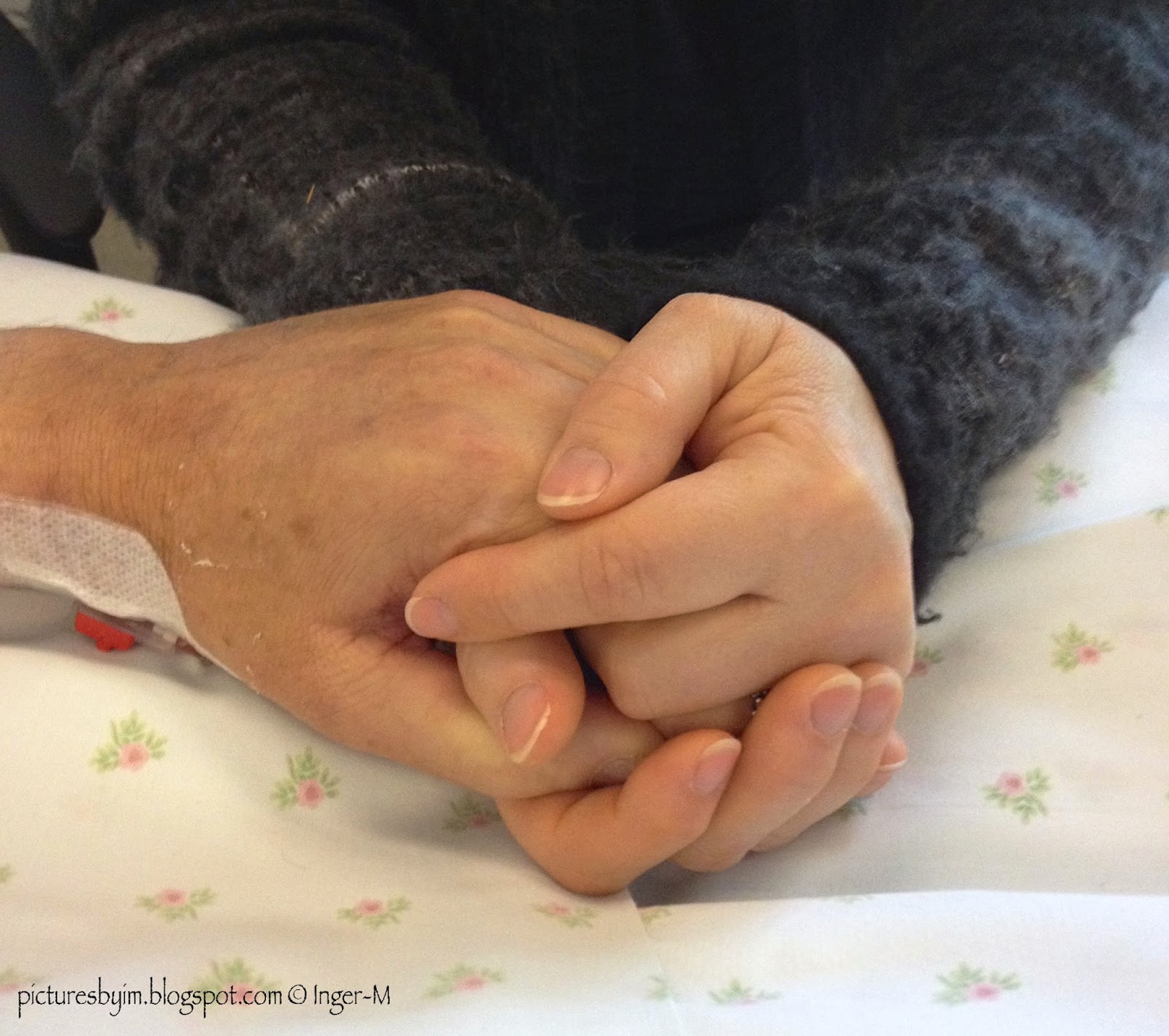 My darling, the love of my life, my husband for 33 years, was no more.

24 hours earlier he had been sitting up in bed. It was, and still is just surreal.

I am grateful for having had the honor of being Sigve's wife for 33 years and 3 and a half months.

Dear Inger, How very sad, I am so sorry for your loss of your beloved husband. You two have been through so much with the earlier cancer and the loss of your son. This is so very sad and I will keep you in my thoughts.

If our words could change things we would never stop writing. Now our hearts sit with you in sadness, trying to comprehend your words that he is gone. There is a hollow sound to this truth, so we wait for a day when some comfort may fill the space you now feel.

Dear Inger a love like yours never dies. He is forever in your heart still they physical separation is so painful. Sending you love.

Dearest Inger… your love will go on forever, and Sigve will be with you always, he is part of you and you are part of him… I truly believe that each person we love leaves a trace residue of their soul upon us and a trace of ours remains with them when they pass on to heavenly realms we can only imagine. I hope these words are a comfort to you, like a warm blanket as you and Hilde Marie and all of your beloved family and friends remain in shock and soak in the love that Sigve left behind. Gentle steps my friend, gentle steps.

Inger,
I am so saddened by your loss. Mother and I are praying for peace and comfort for you and your family as well as all the dear friends that will miss Sigve. I can only imagine how comfortable Sigve must have been in his final moments, knowing that you were there beside him, simply holding his hand as you've done for so many years! Peace and love for you and Hilde!! Charity

Sorry for the loss of Sigve. May you find joy in the memories of the years you had together. Love and good luck to you.